Within a few days of owning my Live Steam 2 Cylinder Open Cab Shay I was convinced that an R/C installation was going to be necessary. Even though the Shay is very easy to keep up with and control by hand, the design of my railroad made that impractical. Each run requires the Shay to be turned on a ground level Wye, part of which is in a cut below grade. Reaching the controls on the Shay at ground level and below is no fun.

I did some searching on the internet and didn't find much, but what I did find suggested that the Shay would easily operate on a single servo connected to the Johnson Bar. This is supposed to work because Accucraft's implementation of the Johnson Bar on the Shay is actually a valve that has varying degrees of opening. To test this theory I tried manually controlling the speed with the Shay's Johnson Bar. Testing indoors on elevated (but level) track seemed to work reasonably well, so the next step was to see how it would perform outside on the grades. For the same reason that I need R/C to begin with, a manual test of the J-Bar wasn't going to be feasible. The next best thing was a Quick & Dirty installation of R/C using some old (1970's) gear laying around the house. My son Matthew did most of the work shown in this picture.

NOTE: Most photos in this article can be clicked to open a hi-res (larger) version. [Click to Enlarge] 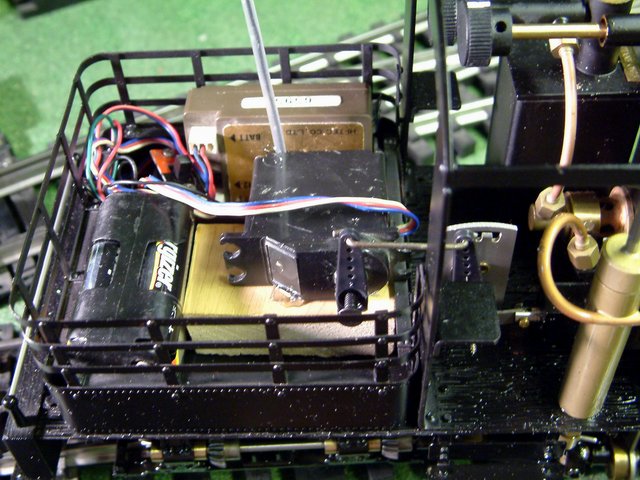 With the success of the Quick & Dirty experiment, it was time to plan a serious installation. More research was in order that included discussions with Dave Goodson and Tony Walsham. I really like the idea of the RCS system because of the small transmitter size. Dave helped me choose a servo and Tony was helpful at explaining the single-servo version of the RCS system. In the end I was forced to choose an entry level 2-stick R/C system because of budget, but all the work that follows to install this system will easily translate to the RCS or another high-end system.

The Open Cab Shay presents some challenges to hiding an R/C install since it has a very small water tank and a wood rack rather than an oil bunker. I decided early on that I wanted the servo, plus whatever else would fit, in the water tank. On the Mich Cal version of this model, Accucraft provides a hole in the tank for the servo linkage. Not so on the Open Cab version.

To allow for drilling the hole and to make test fits easier, I removed the water tank / wood rack from the Shay. This is fairly easily done by removing 4 machine screws. The screw nearest the butane tank is a challenge because a nut driver will not fit. I ended up carefully using pliers to loosen the bolt.

With the tank removed and the new radio and servo in-hand I began by test fitting components. The radio fit on the available floor space along with the servo, but the tank lid would not close. A second test fit seemed to indicate that the required four AA batteries would fit in with the servo, but only in groups of two. So off to Radio Shack for battery holders. As usual for Radio Shack, the selection was less than ideal so I ended up with battery boxes rather than the open snap holders I had in mind. Back at the shop it was immediately obvious that the boxes wasted too much space and would not fit. Razor Saw to the rescue.

I ended up building this L-Shaped battery box by cutting one box short and gluing the two together with PVC glue. A little quick wiring change resulted in a compact 6 volt supply. [Click to Enlarge] 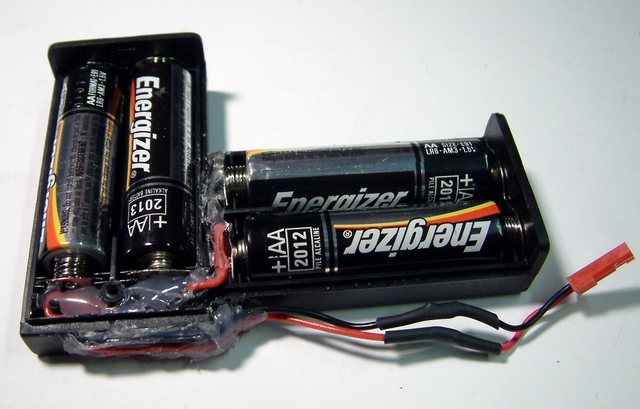 The new battery box just fits inside the tank with barely enough room left for the servo.

Continued on the Next Page